Ketu, which is torso of the demon who cunningly had nectar, is also considered shadowy planet. It is a neutral, dry and fiery planet. It is the descending point where the orbit of the Moon across the ecliptic. As stated above, like Rahu, Ketu is also a universally malefic planet provided it is not aspecting any of the planets or houses, closely i.e. within five degrees.

Ketu signifies occultism, spiritual initiation and development, natural healing methods and diets, religion and diversification, services. If Ketu is not afflicted and beneficially disposed, it can give sudden burst of energy, discretion, liberation universality, idealism, intuition, psychic ability. When Ketu is malefic, recital of Ketu mantra is very benefic and favourable. In someone’s chart, if Ketu is in the eighth house with the Moon, it is said that the person must attempt suicide at least once in life time. When Ketu is afflicting it causes wounds, injuries, diseases in spine and nervous system, consumption, surgery. Ketu is also general significator ofmatemal grandparents, mathematics, fire etc. As in the case of Rahu, when Ketu is not afflicted it showers its blessings to the house it occupies. Ketu is worshipped in the night on Saturday.

The sage of the Mantra is Madhu chand. The metre is gayatri. The deity is Ketu. The idol of ketu should be made of brass. The mantra is to be recited for seventeen thousand times. 1 /10 of homa be done with Kusha leaves and 1 /10 of homa is done as tarpan and 1/10 of tarpan be done as marzan. After that the devotee should donate articles of Rahu. After realisation of the mantra Brahmins are fed with rice mixed with green pulses (Khichri). Mantra for recital is:-

Take smoky coloured flowers in your hands and do dhyana as under.

Now perform pooja of Ketu by taking rosary in the hand and recite the following mantra for the rosary.

Now start reciting mantra facing towards east direction. Ketu mantra for recital is as under.

Other Ketu mantras for recital are

Other points to remember: – The articles for donation for Ketu are cat’s eye (gem), sesame, oil, blanket, black flower and black cloth. Classics are of the view that those persons who are not in a position of

wearing the gems of Ketu which are very costly may wear root of ashwagandha which is not matured.

Navgrah Mantra is a combined Mantra for all the nine planets. This is an extremely useful and beneficial Mantra, since it’s recital, on the one hand, strengthens benefic planets and increases their positive influences and on the other, propitiates malefic planets which not only reduces their malefic affects but also start blessing with their benefic affects, instead. Navgrah Mantra is recommended for all, particularly those whose benefic planets (rnitra grahas) are weak and therefore unable to deliver. The malefic planets in their case are quite potent to do maximum damage. Navgrah Mantra should be recited life-long to ensure that one always gets optimum benefits from all the planets.

Fruits, honey and spiced rice of various kinds are offered during pooja. The mantra for recital is: –

Everyone is interested in who they are and where they are headed. Astrology can be used as a guidepost on our journey to ourselves and to our future. Through the synchronicity of the cosmos and the magic of this ancient art/science our soul journey is revealed. In my readings I examine the natal chart and current transits and progressions to uncover the energies of one's true self and one's future. I do not believe there are any "bad" aspects or "bad" planets, but rather all the planetary and aspect energies can be used In my readings I look both at a client's potential as indicated in the natal chart and at present and future energies and opportunities. I am happy to focus on a particular question or area of life as requested.
Previous The Navgrah Mantra / Navgrah
Next The Rahu Mantra / Rahu Dosh Nivaran Mantra Jaap / Rahu Vedic Mantra / Rahu Graha Shanti Mantras 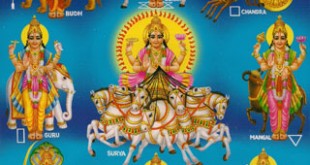